You are here: Home / Past members of the Commission / Prince Adetokunbo Adeyinka Kayode 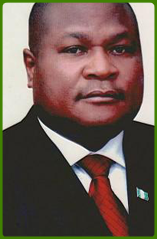 Prince Adetokunbo Adeyinka was born in Lagos, Nigeria on October 31st, 1958. His early education got underway at the Muslim District Council Primary School Mushin in 1964. After that he attended Pedro Primary School, Shomolu, Lagos and by 1970 he was welcomed to the second oldest school in Nigeria, the reputable CMS Grammar School, Bariga, Lagos.

By 1975 Prince Kayode had moved on to cover his advanced studies at the Polythechnic, Ibadan, Oyo State, and from there he went on to the University of Lagos to study Law. After earning his Bachelor of Laws Hons Degree (LL. B) in 1981, Prince Kayode gained admission to the Nigerian Bar. He went through the standard 1 year period of training, and entered as a Solicitor and Advocate of the Supreme Court. In addition to all of that, the Prince also earned his Post-Graduate Diploma in International Commercial Arbitration from the Chartered Institute of Arbitration, Oxford University, in England.

Prince Kayode enjoyed a very successful legal career, and dealt extensively with commercial, corporate and constitutional law matters. Over time he rose to become a Senior Advocate of Nigeria within the Legal Practitioners Privileges Committee. He also gained membership to a variety of professional legal associations, such as the International Bar Association, Nigeria Bar Association, Commonwealth Lawyers Association and many others.

The public has been very appreciating of Prince Kayode’s dedication and efforts, and as such he was elected into many different positions, including memberships for the Federal Judicial Service Commission, Council for Legal Education, and Presidential Committee on Democracy and Good Governance. Furthermore, Prince Kayode has served as Chairman Abuja Branch of the NBA, Chairman of the Human Rights Committee and he became a member of the National Executive Committee of the NBA. During the small amount of free time he has available, the Prince volunteers for community based projects and enjoys playing golf when possible.

His incredible achievements and commitment to the people have earned Prince Adetokunbo Adeyinka kayode a stellar reputation in Nigeria and internationally. He continues to be an asset to society and an important member of the legal community.