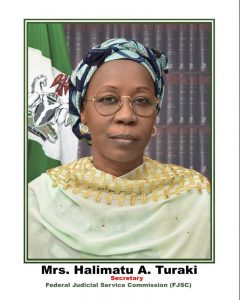 Mrs. H.A. Turaki, being an excellent student, and desirous of furthering her education, proceeded to Bayero University, Kano State where she obtained an LL.B (Hons.) in 1995 and was called to the Nigerian Bar in 1996.

Mrs. H.A. Turaki’s letter joined the services of the Federal Ministry of Justice as a State Council. As a result of her passion, diligence, and hard work, she was made the Secretary, Body of Attorneys General from 1999 to 2001, a function which she carried out with all dexterity. She was appointed as the Acting Secretary, Body of Benchers from 2001 to 2005, being the first to be appointed in that capacity. Prior to her appointment, Secretarial services for the Body of Benchers were provided by some staff on ad-hoc arrangement.

As a credit to her tenacity and adroitness, Mrs. H.A. Turaki was appointed as substantive Secretary of the Body of Benchers. Her immense contribution and astute leadership skills gave birth to the Self-Accounting status of the Body which was obtained in 2013.

In recognition of her sterling qualities and exemplary leadership style, she was made a member of the Body of Benchers and confirmed with the status of a Life Bencher in February 2018. She is a member of several Associations both locally and internationally. She has traveled widely and attended series of training, seminars, and conferences.

Mrs. Turaki is happily married and blessed with children. Her hobbies include writing, carrying out research, and playing scrabble.