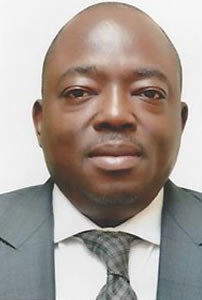 Olumuyiwa Akinboro, Esq. was born into the respected family of Senator (Chief) Ademola Hezekiah Akinboro and Chief Mrs. Hanna AdefunkeAkinboro, both of blessed memory, on the 21stof November, 1965 in Ibadan City, Oyo State. The astute lawyer hails from Kuta, Aiyedire Local Government Area in present day Osun state. Mr. Akinboro started going to school at the very early age of 3, when he was enrolled into the Children Home School, Molete, Ibadan where he spent 7 years between 1968 and 1975. The young Akinboro proceeded to Ibadan Christ Apostolic Grammar School, Adesola Ibadan and later, Iwo Grammar School, Iwo, Osun State between 1976 and 1979 and 1979 to 1981 respectively.

Between 1981 and 1983, he was at the Oyo State College of Arts and Science (OSCAS), Ile-Ife, Osun State. He attended the Kwara State College of Technology, Ilorin between 1984 and 1986. Mr. Akinboro’s quest for more knowledge took him to Lagos State University, LASU where he bagged an LL.B (Hons) in 1990 and was subsequently called to the Bar in 1991.

Olumuyiwa Akinboro, Esq began his promising legal career after his call to the Bar in 1991, when he ventured into private legal practice. He attended various trainings/workshops at home and abroad which blended and thoroughly bred him to become an accomplished legal consultant of repute.

As a thorough-bred legal expert, Mr. Akinboro serves as consultant to a number of governmental and private business organizations, notably, the Nigerian Investment Promotion Council. He also delivered several lectures on investments and Business Law, and participated in a number of related programmes. He was a member of the Nigeria Presidential Business delegation to France and Brazil in 2007 and 2008 respectively. In 2009, Mr. Akinboro presented an insightful paper to the Business/Investment delegation from the Republic of Ireland to Nigeria titled “Investments Regulation and Incentives for Foreign Direct Investment (FDI) in Nigeria”.

Mr. Akinboro held numerous positions and served as member of notable committees within the Nigerian and International Bar Associations. He is affiliated to a number of associations including the Nigerian Bar Association, Chartered Institute of Arbitrators, Chartered Institute of Mediators and Conciliators among many others. He was appointed a Member of the Federal Judicial Service Commission on 4th July, 2013 by the President of the Federal Republic of Nigeria, Dr.GoodluckEbele Jonathan, GCFR. He is happily married and blessed with three (3) children.