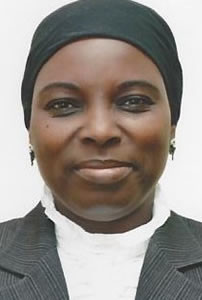 Mrs. Fatima Kwaku (MFR) was born on the 22nd of October 1949 into the family of Agafi of Maiduguri in Borno State. She was enrolled intoHausari Junior Primary School, Maiduguri and graduated with a high grade in Primary School Certificate. She later proceeded to Provincial Girls’ Secondary School, Maiduguri in Borno State. She continued her academic pursuit in Holborn House School, Whilton Lodge, North Hampton, England; as well as Cornwall School, Penzance, England from 1961 to 1967, where she graduated and obtained her GCE “O” level.

She later proceeded to the Kent College England as well as BorlandsStutors College, London from 1967 to 1970 where she obtained her GCE “A” levels. She thereafter proceeded to the Ahmadu Bello University, Zaria where she bagged her LL.B (Hons) between 1971 and 1975. She later enrolled in the Nigeria Law School, Victoria Island, Lagos, where she was successfully called to Bar in 1976.

From 1976 to 1977 she spent her service years in the Chief Magistrate Court, Bompai, as well as the Chambers of Messrs E. Noel Grey and Co, both in Kano. In 1977, she started her Private Legal Practice and opened her own Chambers,  Ya Fatima Chambers along Ahmadu Bello Way, Kano. The Chambers is still operational to date.

Mrs. Fatima Kwaku (MFR) exhibited great love and passion in the service of her fatherland during her numerous call-ups and appointments to serve. She was a member of numerous associations and committees.Mrs. Kwaku was appointed a Member of the Federal Judicial Service Commission on 4th July, 2013 by the President of the Federal Republic of Nigeria, Dr.GoodluckEbele Jonathan, GCFR. She was also a recipient of numerous awards including the prestigious Member of the Federal Republic; MFR. Mrs. Fatima Kwaku (MFR) is blessed with four graduate daughters.