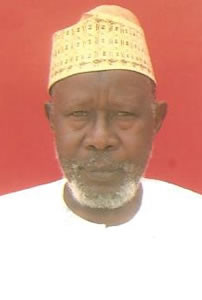 Lt. Col. Daudu Suleiman, PSC, (Rtd) was born in Kano on the 17thof December, 1942. At the age of 8, he was enrolled into Bebeji Junior and City Senior Primary Schools between 1950 and1956. He proceeded to Government College, Kaduna for his secondary school education, where he stayed from 1957-1962.

As an enterprising young man, determined to pursue a career in the Military, he attended Officer Cadet Training at the Depot, Zaria and the Nigeria Military Training Centre (NMTC) between January-July 1963. He later proceeded to the Royal Canadian School of Infantry from August, 1963 to December, 1964. He attended the Junior Staff Course at Abeokuta from April to August, 1966; Junior Staff College at Hythe Warminster, England, October to December, 1972 and the Senior Staff College,Jaji, Kaduna from June to November, 1976.He attended various regimental, administrative, leadership and National Survival Courses and Seminars.

As a gallant military officer, Lt. Col. Daudu Suleiman served this great country in different capacities, where he exhibited sterling qualities that earned him the privileges of taking part in various civil activities.

He was appointed a Member of the Federal Judicial Service Commission on 28th March, 2012 by the President, Federal Republic of Nigeria, Dr.GoodluckEbele Jonathan, GCFR.

He is married and blessed with children.