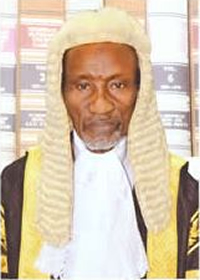 Mahmud Mohammed who hails from Jalingo in Taraba State was born on the 10th of November 1946.
He studied for his Bachelor’s degree in Law (LL.B) at Ahmadu Bello University, Zaria, graduating in 1970; after which he attended the Nigerian Law School, in Lagos and was subsequently called to bar in 1971.
He began his career in public service with the Ministries of Justice of the defunct North-eastern state, and Gongola State, and the judiciaries of the Defunct Gongola State.

In 1991, he was appointed the Acting Chief judge of Taraba State, and later confirmed the Substantive Chief Judge of Taraba State in the same year.
Prior to being appointed a Justice of the Supreme Court in 2005, he was Justice of the Court of Appeal, and then Presiding Justice.
In addition to his legal qualifications, he has a certification in legislative drafting (from the Commonwealth Institute of Legislative Drafting), Human resources planning and Management (from the National Institute of Public Management, Washington USA), Administration of justice in a presidential system of government (from the Institute of Judicial Administration, University of New York USA) and  Government legal advisers course (from the Institute of Advanced Legal Studies, University of london, UK).

In his years in public service, he  served as  member of several committees and panels on national assignment. He received national recognition awards which include Commander of Order of the Niger (CON) as well as Officer of the Order of the Federal Republic of Nigeria (OFR).

Mahmud Mohammed attended several workshops and seminars; he has also presented papers at different judicial workshops. He is a member of the Bar Council, Council of Legal Education, and the Body of Benchers.

He is married with children, and his hobbies include reading, swimming, farming, animal rearing and photography.