You are here: Home / BASSEY.E BASSEY 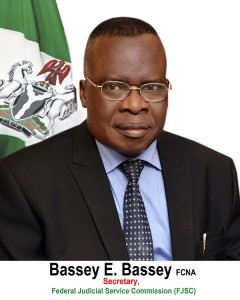 Mr. Bassey Eleng Bassey was born into the family of Chief Eleng Bassey of Anong-Ezeke of Ekureku Town in Abi Local Government Area of Cross River State on September 24, 1960.  A child of great promise, the young Bassey started and completed his primary education at St. Vincent Primary School, Anong.  He was a pioneer student of Agbo Comprehensive Secondary School, Egboronyi and thereafter, proceed to Ishiagu High School, Ishiagu in Ivo Local Government Area of present Egbonyi State where he completed his secondary education.

Always among the best students in all his academic endeavour, Mr.  Bassey gained admission to the University of Calabar where he earned his Bachelor of Science Degree, B.Sc. in Accounting in 1988.  He also got his Master in Business Administration MBA, from the same University in 1994.

Mr. Bassey Eleng Bassey, who worked as Auditor II in the office of the Auditor General, Cross River State, was an Accountant with the Independent National Electoral Commission (INEC) in Cross River State.  He became a Principal Accountant  in INEC Headquarters in Abuja also work as part time lecture at the University of Abuja before joining the Federal Judicial Service Commission as Chief Accountant between 2001 and 2007.  He was promoted to Director, Finance and Accounts in 2007 and Acting Secretary between August, 2017 and March, 2018.

As the Secretary of Federal Judicial Service Commission, Bassey is both the Chief Executive and Accounting Officer of the Commission.  By virtue of his position, he is also the Chairman of the Committee charged with the responsibility of conducting promotion interview and other sundry duties as may be assigned to him by the Commission which is chaired by the Chief Justice of Nigeria.  His Lordship, Hon. Mr. Justice Walter Samuel Nkanu Onnoghen, GCON.

Mr. Bassey Eleng Bassey is humble, discipline and peaceful, he is married with children, Bassey who is also a Pastor, spends his leisure time in horticulture and in reading books on leadership and Christian literature.  A widely travelled professional, Bassey has attended several courses and conference both locally and internationally including the United States of America, USA, United Kingdom, Europe and Dubai.