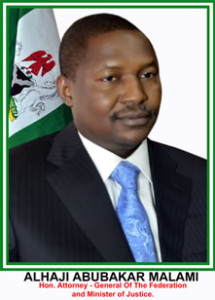 Mr Abubakar Malami, SAN was sworn in as the Minister for Justice and Attorney-General of the Federation (AGF).

Malami was born in Birnin Kebbi of Birnin Kebbi Local Government Area of Kebbi State on 17th April, 1967 to the late Hon. Khadi Malami Nasarawa and his wife Halima Malami.

The new Minister for Justice has his primary education at the Nasarawa Primary School (1973-1979) before proceeding to the College Of Arts And Arabic Studies (1979- 1984)· Malami attended the College Of Legal And Islamic Studies, Sokoto between 1984 and 1992 after which he was admitted to study Law at the Usmanu Dan Fodio University, Sokoto from 1987 to 1991.

Having bagged his LL.B degree at the Usmanu Dan Fodio University, Malami enrolled at the Nigerian Law School, Lagos and was subsequently called to the Nigerian Bar in 1992. He thereafter enrolled for a Masters in Public Administration at the University Of Maiduguri in 1994.

In 2014, Malami contested for the governorship ticket of the All Progressives Congress (APC) in Kebbi state but lost to Mr Atiku Bagudu who is now the incumbent governor of the state.

Prior to that time, Malami had served in different capacities, some of which are listed below:

Worthy of mention is the notable fact that Mr Abubakar Malami was conferred with the distinguished rank of the Senior Advocate of Nigeria (SAN) in 2008, about 16 years after he was called to the Nigerian Bar. At 48, he is also presently the youngest member of the federal executive council.

Mr Malami, SAN will now have the onerous task of reforming Nigeria’s legal system to ensure justice for all and sundry, regardless of their standing in the society.